Treatments for Psoriasis: How to Manage This Chronic Skin Disorder 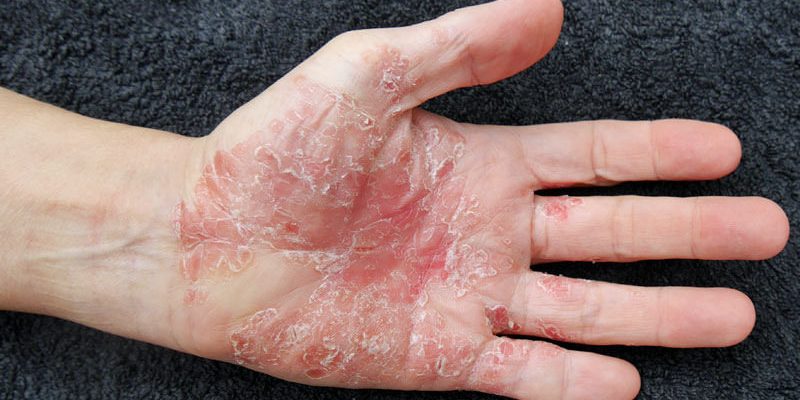 Psoriasis is a chronic inflammatory disorder that results in plaque formation on the surface of the skin. The exact cause of this disorder is unknown, but it’s likely the result of problems with the body’s autoimmune system. Psoriasis typically affects the skin on the scalp, joints, hands, and lower body, including the knees, elbows, lower back, feet and genitals.

Adults and children can be diagnosed with psoriasis, but the disorder commonly presents when people are in their 20s. The thick patches of skin associated with psoriasis wax and wane depending on stress levels, environmental conditions and the presence of infection.

Most people who have psoriasis initially assume they have a skin infection or are experiencing an allergic reaction. Once they see a doctor, however, diagnosing psoriasis is relatively easy, but in some cases a skin biopsy is required.

This skin disease is characterized by raised, red and silvery irritated patches of dead skin cells that appear on the body’s surface. Those with psoriasis have cells that multiply up to 10 times faster than normal cells. Therefore, psoriasis lesions are produced as a result of this abnormally fast cell production, which causes an excess of cells to build up on the surface. These thick, irritating patches are almost always painful and itchy, and may bleed and crack. 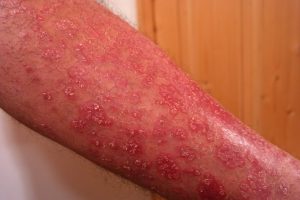 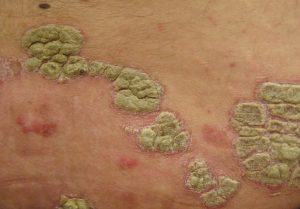 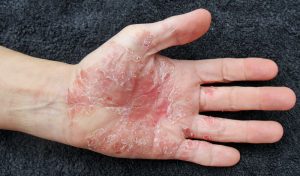 Once psoriasis has been diagnosed, treatment is required. The type of treatment a doctor will advise will depend on how much of the skin’s surface is affected, the thickness of the plaques, and if the individual is also suffering from arthritis. The basic management of psoriasis involves use of topical and systemic medications. Other treatment approaches, which can be used at the same time, include use of phototherapy, moisturizers, salicylic acid, and urea. Stress reduction is also a vital part of treatment, as doctors believe stress levels are a major factor in psoriasis flare ups.

Over the years many guidelines have been developed for the treatment of psoriasis. When topical medications fail to work, most people are treated with systemic medications. Methotrexate is the drug that’s often prescribed; for more severe cases, doctors may suggest cyclosporine. While these drugs may work well to treat the condition, they aren’t entirely effective.

Is there any new research on, or new treatments for, psoriasis?

For much of the past 30 years, the treatment of psoriasis had remained stagnant and many patients experienced poor quality of life, mainly because prescription drugs don’t work reliably. There are also a significant number of patients who are unable to tolerate these therapies — or develop intolerable side effects.

In the last decade, several new agents have been developed to treat psoriasis. Because researchers and doctors have a better understanding of the role of that the immune system plays in psoriasis, they have been able to develop a newer class of drugs, known as targeted biological agents. There is good evidence indicating that these biological agents are very effective in treating psoriasis. This breakthrough has led to a new era in the management of this complex disorder.

These biological agents are proteins or antibodies that have been manufactured in a lab. Once injected itno the skin, they block or alter the immune system that is known to contribute to psoriasis. This helps limit both inflammation and damage to the joints. By interfering with specific immune cells (T cells), these biological agents simultaneously reduce the overgrowth of thick scaly skin that makes psoriasis such a recognizable, and difficult, disease.

The biological agents currently approved for the use of moderate to severe psoriasis are:

Evidence from clinical trials suggests that these agents can reduce the symptoms and signs of psoriasis in more than 75% of patients. But, like most medications, these newer agents have several negatives: They have to be injected; are incredibly expensive; require close monitoring, as they can increase the risk of infections like tuberculosis; may be associated with higher risk of cancer; and sometimes cause allergic reactions.

Scientists are continuing to learn more about the cause of psoriasis so that better, more effective therapies can be developed. Recent genetic work indicates that within a few years, there will be a genetic test to help screen individuals who are at risk for psoriasis. There is hope that more specific drugs targeting precise components of the immune system will not only lead to more effective psoriasis therapy and have fewer side effects.